Los Nevados de Colombia is a group of 5 ice-capped volcanoes in the Andes mountain range, which include the Tolima, Santa Isabel, Quindio, Machin, and the largest of them all the Nevado del Ruiz Volcano. (Nevado means “snow-covered” in Spanish),

The Nevado del Ruiz is known as a stratovolcano, with a conical shape consisting of many layers of volcanic ash and hardened lava. With an ice cap ranging between 190 meters (620 ft) to 30 (98 ft) meters thick, it has an average thickness of roughly 50 meters (160 ft).

The peak of this active volcano is 5,321 meters above sea level and covers roughly 100 square kilometers (38 square miles). It’s also the only one of the 5 volcanoes that is accessible by vehicle, making it a favorite for visitors from all ages and backgrounds. 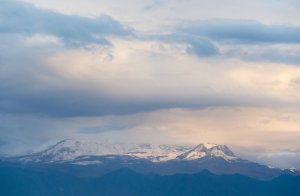 Ascending the volcano you pass many eco-systems and beautiful transitional landscapes such as primary and secondary forest, semi-paramo, paramo, and super-paramo. Generally, the volcano is sparsely forested, with a decrease in forest cover as the elevation increases. Although there may not appear to be enough natural habitat and food for animals to survive at such great heights and with such scarcity of vegetation. The Nevado del Ruiz is home to 27 endemic bird species, along with threatened animals such as the Mountain Tapir and Spectacled bear. 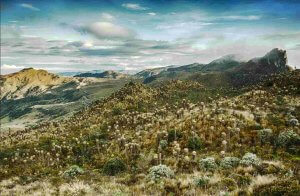 The Nevado del Ruiz summit is covered by large glaciers that primarily drain into the Cauca and Magdalena Rivers. The runoff from these glaciers is also a major source of freshwater for approximately 40 small towns in this area. So, there is some concern as to the water supply for these towns if these glaciers should completely melt away. 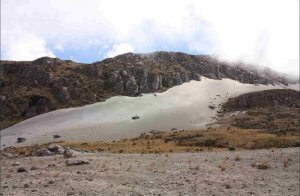 The most recent devastating eruption was on November the 13th, 1985. In an avoidable tragedy killing approximately 25,000 people from the nearby town of Armero. Another serious eruption of this active volcano still continues to pose a danger to many towns nearby, with an estimated 500,000 people at risk from lahar flows, if/when it should occur.

In the past visitors were able to make the ascent to the highest point of its snowfields in a vehicle. But since volcanic activity started in 2010 the Nevado del Ruíz volcano has been in alert level Yellow (III). The consequence of this is that visitors can only enter as far as the Valle de las Tumbas sector at 4,400 MASL. This sector does not have access to snow or to the edge of the glacier but does provide an amazing panoramic view of the interglacial valley and on clear days a sensational view of the Nevado del Ruiz volcano.

Interested in a day tour or private transportation during your Colombian holiday? Then check out our Affiliates page to book your experience at the best price.