Historical Weather and Climate Facts of the Eje Cafetero – The Colombian Coffee Zone!

What’s the weather and climate like in the Coffee Zone of Colombia?

Climate change is affecting Colombia just as it is affecting every other part of the world. For this reason, we can only really make an educated guess about what the weather will be like in the Coffee Zone of Colombia at any time of the year. Unfortunately, our guesses are much less accurate than what they were only a couple of years ago…

The area comprising the Eje Cafetero in Colombia is a triangle of three cities: Pereira, Manizales, and Armenia. Not only is it extremely important as the major coffee-producing center, but also as a tourist destination. As one might expect from being in the Andes mountains, climate changes can be significant in a relatively short time or distance. 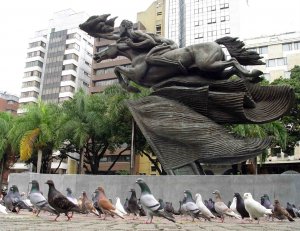 Located in Risaralda is a medium-sized city with stunning surrounding countryside.

The climate of Pereira is warm and often overcast. During the year, the temperature typically varies from 64f/18c to 80f/27f and is rarely below 62f/11c or above 85f/30c.

The best times of the year to visit Pereira for outdoor activities are usually from middle June to early September and also from late December to late January. However, in reality, any time of the year is lovely here. The Traditional Coffee Zone

In Pereira, the average percentage of cloud cover only experiences mild seasonal variation. The clearer part of the year begins in June lasting through September, July being especially so. More clouds can be expected from September until June.

Humidity in Pereira is not especially significant. The slightly muggy time of the year is from November to July, with May being the highest. The wind is rarely a factor in Risaralda.

Average Rainfall – Millimeters / Inches, and the Number of Rainy Days in Pereira Colombia. 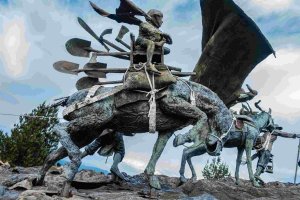 Another point in the triangle of the Eje Cafetero. Not far from Pereira (53 km/33 miles), it has a totally different climate. Much cooler and considerably more rain.

The climate in Manizales is comfortable and generally overcast. Temperatures typically are from 57f/14c to 73f/23c and are rarely below 54f/12c or above 77f/25c.

There is less cloud cover from June to September, while July is the best and April has the most cover. Humidity is zero and the winds very light.

Average Rainfall – Millimeters / Inches, and the Number of Rainy Days in Manizales Colombia.

The third point of the triangle; the climate in Armenia is warm and overcast. Typical temperatures are from 62f/17c to 79f/26c and rarely fall below 60f/16c or above 83f/28c.

The finer months in Armenia are June to September  – less cloudy. April is very cloudy. Humidity is very low and the winds are not a factor.

Average Rainfall – Millimeters / Inches, and the Number of Rainy Days in Armenia Colombia. 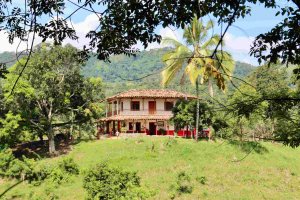 Very different from Pereira and Manizales is Viterbo! It is much warmer even though they are only 53 km/32 miles apart or less (approximately 1 hr drive).

The least cloud cover in Viterbo is from June and lasts for 3 months. July is the clearest. It is cloudier the rest of the year with April being very cloudy.

Rain falls throughout the year in Viterbo. As can be seen in the next graphic precipitation is high, with November being the wettest month and January the least rainfall.

Humidity is significant and highest from March to August, with May being the most affected. February is the lowest. Viterbo is very calm with regard to wind.

Average Rainfall – Millimeters / Inches, and the Number of Rainy Days in Viterbo Colombia. 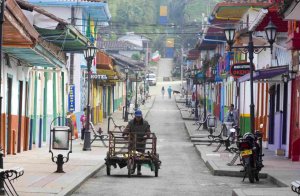 The town of Salento is halfway between Pereira and Armenia and is one of the most popular tourist locations in Colombia and so we concentrate many of our tours around the fabulous town of Salento.

The climate in Salento is comfortable and largely overcast. Typically ranging from 57f/14c to 73f/23c and is rarely below 54f/12c or above 76f/25c.

Clearer skies in Salento begin around June and last for four months, with July being the best. The cloudiest month is April.
The wet season is from late March to early with December having the greatest precipitation. January is the driest. Humidity is extremely low. The wind is very slight at all times.

Average Rainfall – Millimeters / Inches, and the Number of Rainy Days in Salento Colombia. 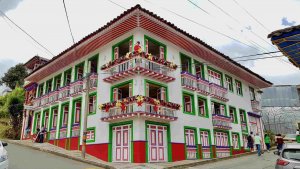 The climate in Filandia, a pueblo (small town) near Salento, is comfortable and oftentimes overcast. The temperature typically varies from 59f/15c to 75f/24c and is rarely below 56f/13c or above 79f/26c.

The clearest time of the year in Filandia is from the beginning of June and lasts until September. The best month of the year is July.  The cloudiest part of the year begins around the middle of September and ends around June, with April being the cloudiest.

The wet season is from the end of March to December, with October being the wettest. The dry season is from December to late March. The driest is January.

Average Rainfall – Millimeters / Inches, and the Number of Rainy Days in Filandia Colombia.