Cartagena, a city of almost 1 million people set on Colombia’s north coast, is teeming with history. Today, the old walled city is a living museum, where traces of Spanish influence remain. Modern luxury coexists with colonial-style mansions, and the bustling, colorful streets offer a glimpse into Cartagena’s tumultuous history.

From Spanish Colonization to Independence

The original tribes of this region, the Puerto Hormiga culture, and later the Sinú society, lived around 4,000 BCE and survived until European colonization centuries later. In 1533, Spanish commander Pedro de Heredia founded the city of Cartagena de Indias when he built a settlement out of an abandoned village. Spanish sailors who wanted to start a new life soon followed with him. The city prospered as the Spanish raided the tombs of the indigenous tribes, who had buried their dead with their riches. In the 17th century, the king of Spain ordered the city to become a slave hub, further adding to its fortune. Eventually, the Spanish built a wall and fortress around the city, and it became the most protected port in South America.

*Planning on visiting Cartagena for a few nights? Then be sure to read our article on the best neighborhoods in Cartagena to stay in to truly enjoy your stay here!

In 1811, Cartagena was the first city to declare independence from Spain, but the Spanish commander Pablo Morillo took the city back. This started the 10-year process of fighting for independence, in which Cartagena successfully separated from Spain during the War of Independence. The city proclaimed Simon Bolivar as its liberator, and to this day, he remains one of the most important people in Colombia’s history. Today, Cartagena is still the largest port in Colombia and despite its tumultuous history, the walled Old City has been preserved, with colonial architecture and historic mansions.

Top 5 Things to do in Cartagena

While this city provides endless exciting activities, here are 5 things you must do while on your Caribbean vacation to Cartagena. 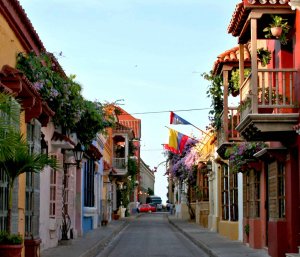 Transport back to the 17th century as you explore the colorful, colonial-style streets of the Walled City, which were used to protect the city from invasions. The photogenic buildings with balconies windows overflowing with flowers are a perfect spot for pictures. Then cool off inside a cozy bar or cafe, and don’t forget to check out the unique shops, with everything from designer dresses to artisan crafts. *Interested in a private walking tour of the Walled City and its surroundings? Click here for more information.

*You’ll probably like to enjoy some of the best food available in this seaside paradise. Click here to find our recommendations on the very best restaurants in Cartagena! 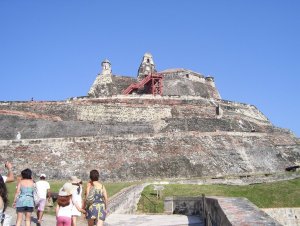 Peering out over the city, this castle’s construction started in 1639 by the Spanish and was finished 150 years later. Since its completion, it stands as Cartagena’s crowing landmark, and visitors can now tour the underground passages and marvel at the impressive architecture. With a grand entrance and complex maze of tunnels, this striking castle and UNESCO World Heritage Site is a must-see while in Cartagena. *Like to take a complete tour of the city of Cartagena including this amazing landmark? Be sure to click here for more info.

On a boat tour, jet around the Rosario Islands, an archipelago and national park located about 100 km off the coast, created to protect one of the most important coral reefs in the Caribbean. Discover Bendita Beach, a large peninsula jutting out into the sea. Bathe in crystal-clear waters and then relax on the white sand with a delicious plate of fresh fish and coconut rice. This beach is perfect for a day trip or staying the night and appreciating the island’s tranquillity and beautiful sunset. *Interested in a full-day tour to the Rosario Islands, complete with lunch, personal beach space, kayaking, and other watersports? Click here to book now. 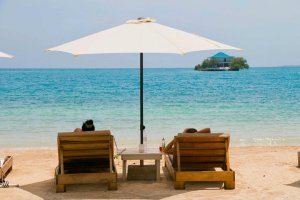 *Like to know our recommendations on how to spend 72 fantastico hours in Cartagena? Then be sure to click here to discover our tips! 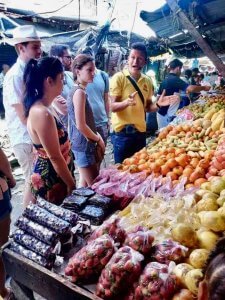 For those wanting to experience the authentic Cartagena, visit the busy and sometimes overwhelming Mercado de Bazurto, which offers a huge selection of fresh fruit, produce, and cheap, delicious lunches. You can even find cooked turtles, discouraged by authorities, but considered a traditional meal by many indigenous communities. Make sure to come hungry! *Interested in sampling and learning about Colombia’s exotic fruits on a guided tour? Click here to book now.

Head to Cartagena’s center of nightlife, Getsemaní, and dance until the early hours at Café Havana. This lively bar welcomes live salsa bands and draws a mix of locals and tourists. And if you don’t feel like dancing, sip on a delicious cocktail, enjoy the music, and watch others take the dance floor.

Interested in a day tour or private transportation during your Colombian holiday?

Like to create or customize a fantastico package tour of Colombia? Then contact us now to receive a Free Consultation, Free Itinerary Creation, and an Obligation Free Quote!