What’s the weather and climate like in La Guajira Colombia?

Climate change is affecting Colombia just as it is affecting every other part of the world. For this reason, we can only really make an educated guess about what the weather will be like in La Guajira at any time of the year. Unfortunately, our guesses are much less accurate than what they were only a couple of years ago…

In the far north of Colombia lies the Guajira Peninsula.

Riohacha, the capital of La Guajira, is located on the west of the peninsular and although it does not rain a lot, it is far from dry, with the climate very hot all year. The wet season is overcast, while the dry season is windy and partly cloudy. During the course of the year, the temperature typically varies from 75f/24c to 88f/31c and is rarely below 73f/23c or above 91f/33c. The least oppressive time of year to visit Ríohacha is from late December to the middle of March. 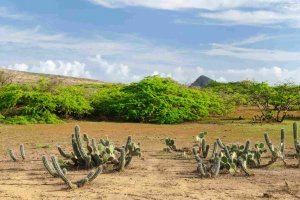 Average Rainfall – Millimeters / Inches, and the Number of Rainy Days in Riohacha Colombia.

Humidity is extremely high, remaining a virtually constant 100% throughout the year.

The water temperature is very comfortable with an average of 82f/28c.